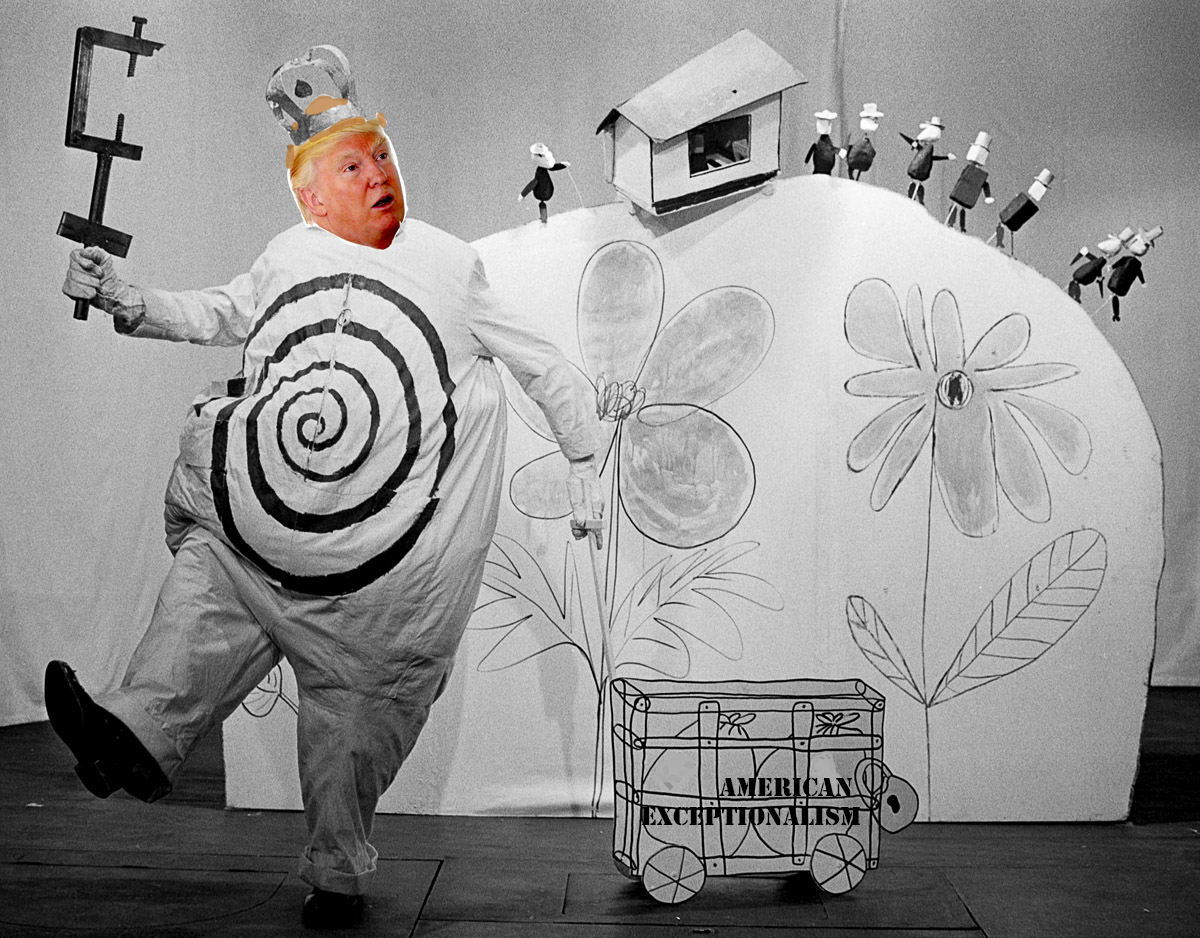 Some of us are spending the summer of 2016 laughing at the incredible absurdity of Donald Trump's candidacy for President. This foolish rich guy is easy to laugh at: he stands before us in extremis, his gigantic ego grotesquely exposed, twisting impossibly between the twin poles of astounding victory and humiliating defeat.

Can you imagine what thoughts are going through Donald Trump's confused mind today? It is one of the quirks of karma that powerful people often face both great success and great failure at the same exact moment, because it is only when we reach our peak that we discover our limits. At this moment Trump is still riding high from his stunning victory in the Republican primaries, a victory so historic that even his opponents must admire the skill with which he dispatched Bush and Rubio and Cruz. He is now the most famous person in the world, greeted by joyous crowds wherever he goes. But his public image is suddenly spinning beyond his reach, as he crashes in the polls ... as the rest of the United States of America gets a look at the weird creature the Republicans have nominated, laughs in revulsion and says "no thanks".

We shouldn't laugh. Forget, for a moment, the question of what the rest of America thinks of Donald Trump. What must the rest of the world think of us? We have surely embarrassed ourselves very badly on the world stage with the specter of Donald Trump, though our internal news media is too busy hysterically chasing the next punchline to remind us that we are putting on a very ugly spectacle for the world to see. American exceptionalism? Four years ago, we could still uphold the illusion that much of planet Earth admires the USA. In the election season of 2016, we must face the fact that we appear clueless and ridiculous to the world: a land lost in its own illusions, stuck in a mediocre past.

We shouldn't laugh, because there is nothing funny about Donald Trump to American Muslims. This was recently called to my attention by a Muslim friend who pointed out that non-Muslims in America cannot possibly understand the trauma they are feeling as they are explicitly threatened and insulted by a demagogue and his virulent mob. If we want to imagine what an American Muslim family must be going through in private right now as they watch this ugliness unfold in the United States of America, we should imagine what a Jewish family must have gone through in Germany in 1933.

(It's sad to say that, on the very morning that I write these words, a new low has been reached: a Republican candidate for Congress named Paul Nehlen has uttered these words: "Why do we have Muslims in America?".)

We shouldn't laugh, because the level of damage that Donald Trump's candidacy is doing to our future is still unknown. Most of us grew up believing we lived in a blessed land. The generation of children who watch the pathetic spectacle of the 2016 election must be growing up with the belief that they live in a banana republic.

And finally, we shouldn't laugh, because the hate-spewing ass-clown might still find a way to win. This is a fate too terrible to imagine, and as far as I'm concerned the Republican Party must disband after 2016 for inflicting this serious hazard upon the world.

A few weeks ago I pointed out in these pages that Donald Trump is the product of a culture of war. Does anybody believe that his absurd candidacy could have been possible if our country's soul was not still suffering from the shock of September 11, 2001, and from the devastating guilt and shame of our horrific, disastrous 2003 invasion of Iraq? It is impossible to imagine such an obvious clown rising to power in a country not torn by war. The culture of war has always given the world its worst politicians, and it's doing that for us again today.

Donald Trump was born in 1946, one year after the end of the most murderous war in the history of the world, a war that killed 60 million and ended with the whimpering pathos of Hiroshima and Nagasaki. He came of age in the era of the Korean War and the Vietnam War. Donald Trump is an avatar of war culture, war incarnate, and he breathes the rhetoric of ethnic hatred — the eternal engine of war — as if it were oxygen.

But Donald Trump is not our problem. We are our problem. Donald Trump is 70 years old and badly out of shape; he may not live long, but the damage his candidacy has done to our national psyche will live on. When we laugh at the absurdity of Donald Trump, we are surely missing the butt of the joke. The butt of the joke is us. We put him on this pedestal. And we will carry the ridicule his candidacy hoists upon us long after he is gone. We are the country that presented the ugliness of Donald Trump as a gift to the world. America the Absurd.