Bold Words: Inspiration from Zola in the Age of Social Media 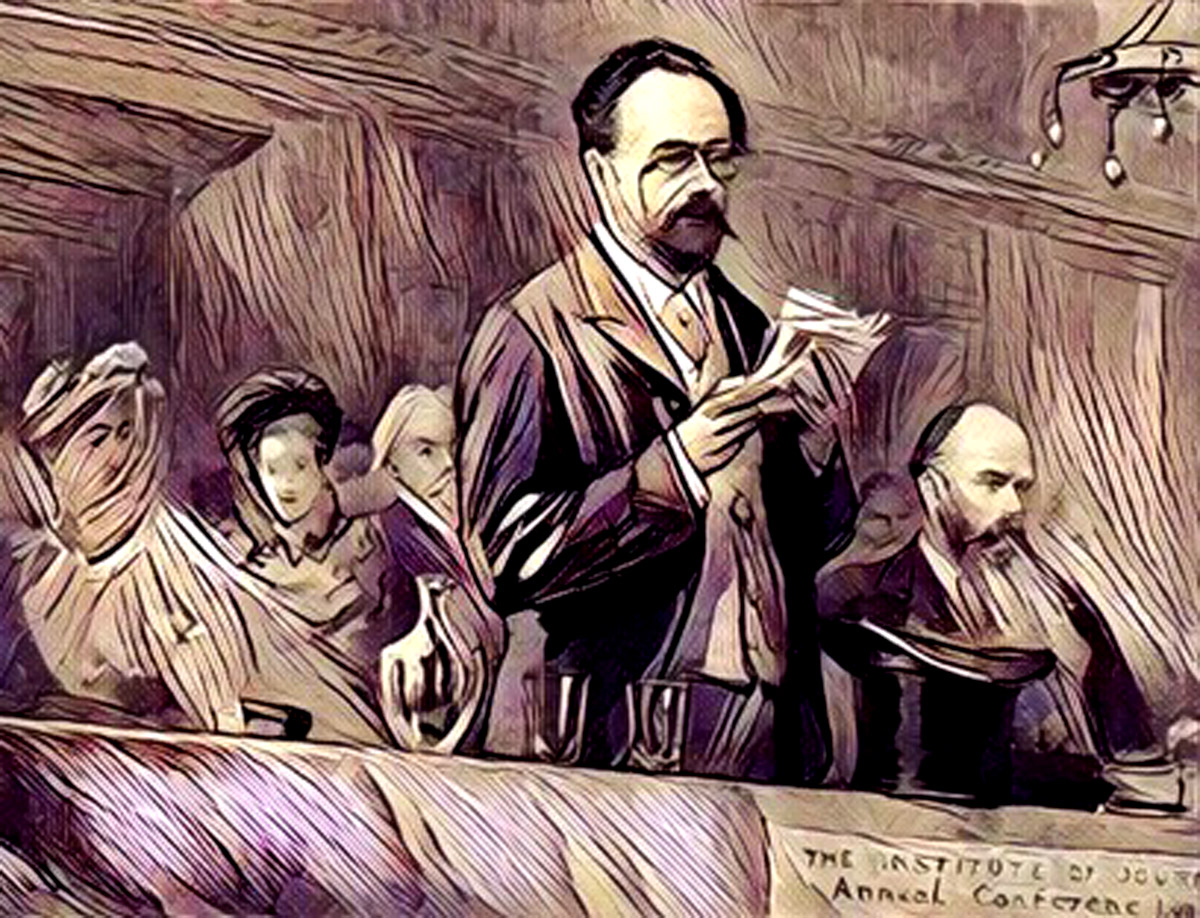 Before the election this past November, and up until the inauguration in January, I deactivated my Twitter account and abandoned my Facebook account of almost ten years. I was worn out and depressed by the negativity I saw every time I scrolled through my phone or logged into a computer, and I hated social media for the mess of trolls and hate-filled people it seemed to produce, and for the friends of mine I saw cut down, harshly disregarded, silenced by underhanded insults, and even in some cases threatened.

My first instinct was to pull back from all this after seeing too much of this negativity. At first I saw my decision to abandon social media as a sort of monk-like retreat from the world and its problems, an action aimed at living to oneself, of hoping to solve the world’s problems from within. I soon realized this to be a mistake. Instead of being a monk-like retreat I realized instead I was engaging in a form of defeat, allowing myself to be silenced and hidden away in the hope that someone else would resolve the issues in my absence.

Only after deactivating my accounts did I stop to think about what things might be like if everyone who wanted to make the world a better and more peaceful place would just step back and join me in closing my eyes to it all, the negativity and the bigotry, the injustice that runs rampant throughout the world. It’s a pretty picture at first, a view of blissful ignorance ... but nothing would get done, nothing would change for the better, the internet trolls would hold all the cards, as the few solitary people who were brave enough to stand up for what they knew to be right would be cut down without mercy for all to see.

My mistake was blaming social media itself for the hate and the troll behavior. But the impulse to conduct political or philosophical disagreements with savage personal attacks is nothing new in the world, and perhaps the first step towards overcoming the dominance of internet trolls may be to recognize that this behavior did not begin with the 21st century. I had a particularly poignant wake-up call when I read <i><a href="http://amzn.to/2pSxIty">Zola</a></i>, Joanna Richardson’s 1978 biography of the 19th century novelist Emile Zola. This book includes her account of France's tumultuous Dreyfus Affair, a complex scandal that played out from 1894 to 1906.

In 1894 the French/Jewish artillery captain Alfred Dreyfus was arrested and imprisoned on the grounds of alleged espionage against his own armed forces, even though evidence quickly came to show that in fact a major Ferdinand Walsin Esterhazy was the real spy in the situation. A military court quietly tried and acquitted Esterhazy, leaving Dreyfus (lower ranking and Jewish) to languish in a prison called "Devil’s Island". Dreyfus's own story would eventually have a happy ending after a grand and brave act of civil disobedience on the part of Emile Zola, whose support amounted to one of the greatest stories of successful activism in history.

It's fascinating to examine what Zola went through personally after he decided to take up the Dreyfus cause and write his letter of accusation to the French president (famously titled “J’accuse…!”), and how his letter was received, not only by the government officials, but by the people of France in general.

First of all, Zola took a great risk in even getting involved with the Dreyfus Affair. Without even considering the personal risk involved he was risking his career, and his career was by then well established! He had recently finished his monolithic “Rougon-Macquart” cycle of books and was widely seen as one of the greatest writers of the time. When he became involved in the Dreyfus case, he nearly gave up his good standing in contemporary letters by standing up for Dreyfus, speaking out against anti-Semitism, and confronting the hypocrisy of the government of France and its way of life as a whole.

Before launching his main assault in "J’accuse…!", Zola penned a series of short articles on the subject of Dreyfus and anti-Semitism for the well-known magazine Le Figaro, to which he was a frequent contributor. It was after an early article speaking out against anti-Semitism in Parisian culture that Le Figaro began to receive angry complaints from its readers announcing the cancellation of their subscriptions to the publication (“I’m sorry, but I have to unfollow you now”). As Richardson says, “Zola was obliged to leave the paper, and to have recourse to brochures.” Emile Zola, widely read novelist, artiste, fired for speaking up for the Jewish people! Already then, even before the famous open letter to the president, Zola was seriously damaging his career in order to fight for what he believed to be right.

Then came "J’accuse…!" itself. Hurt and angered by the reaction he faced with the publication of his initial articles, and outraged by the continued imprisonment of Dreyfus at the hands of a hypocritical government, Emile Zola wrote his great letter of protest to the President of the Republic which was published as the headline article in the paper “L’Aurore” on January 13th, 1898. In "J’accuse…!", Zola spoke out to the president, to the government, and indeed to all the people of France about the Dreyfus case.  Richardson's biography explains that Zola reconstructed the affair “piece by piece” in his letter, presenting each detail of the case which he had been able to unearth in his painstaking investigations and kicking them out into the open where everyone could see them. He demanded a re-evaluation of Alfred Dreyfus in an honest, open court rather than the hushed up and secret military courts in which all of the preceding trials had been held. Zola demanded justice, accusing one guilty representative after another, and concluding with a glorious statement of protest:

While proclaiming these charges, I am not unaware of subjecting myself to articles 30 and 31 of the press law of July 29, 1881, which punishes the offence of slander. And it is voluntary that I expose myself.

As for the people I accuse, I do not know them, I never saw them, I have against them neither resentment nor hatred. To me, they are only entities, spirits of social evil. And the act I am hereby accomplishing is only a revolutionary means to hasten the explosion of truth and justice.

I have only one passion, that of the light, in the name of humanity which has offered so much and is entitled to happiness. My original protest is nothing more than a cry from my heart. So may one dare me to bring me to criminal court, and may the investigation take place in broad daylight!

Please accept, Mr. President, the assurance of my deep respect."</blockquote>

Bold, bold words! And that excerpt is only the very ending of a letter that runs strong and burning (yet with crystal-clear accuracy) throughout its entirety. The powerful words are worth reading today.

The government took action against Zola, forcing him to flee to England as an exile to avoid imprisonment for his "libelous" letter. The punishment he endured is worth noting when considering today's social media, and observing the troll-like behavior of bigoted people who become enraged at any sign of social progress that might, even for a moment light up the night sky. The most interesting thing about Zola's brave act is not the response he got from the military and government establishment, but the response he got from the people of France.

Joanna Richardson tells us: "The publication of “J’accuse…” brought Zola fourteen thousand letters of support and congratulation. Every morning, the papers printed lists of Dreyfusards demanding a re-hearing of the case."

Fourteen thousand likes, and shares, and comments, and hearts! Imagine posting an article of protest and watching this reaction come in. This is what happens when people connect to what is written and begin to express their support. This support can help the writer balance the mob-like backlash that they are also bound to receive.

Oh, did Zola receive the backlash! As soon as the letter was published, the famous French writer Zola was suddenly declared to be "not a real Frenchman". The fact that his father was Italian was brought up in desperate attempts to refute his arguments.

Richardson writes that Zola was "threatened with murder" and "sent parcels of excrement". She describes the scene outside his house:

<blockquote>“Peasants hurled stones through his windows at Medan.  Outside the Pais Justice, hired agitators shouted ‘Death to Zola!’"</blockquote>

Trolls! And, of course, death threats &mdash; that hideous sinking feeling when someone who you don’t even know points out that they now know your name and your face from your profile, and yes, they have plenty of guns around…). The kind of behavior that may seem to us to belong to our own era is nothing new. Hostile trolling may have been made easier, more accessible, perhaps more anonymous, by our social media platforms. But it's been with us for centuries.

When we get discouraged by the reactions to our own expressions on social media, it helps to think about how much Zola accomplished with his courageous act. Dreyfus was finally exonerated entirely, and even allowed to restore his former rank and honors. If Zola not taken his brave step, this would never have happened.

We can, here in the 21st Century, look to Zola and his remarkable bravery as we build up our own defenses against online bullies and their seemingly endless harassments, arguments, insults and threats.

We need not allow ourselves to be scared (or shamed) into silence as I allowed myself to be for a few months last year. We need not retreat into solitude or isolation when we wish to fight for progress. With so many issues in the air &mdash; racial and gender equality, the refugee crisis, the pipelines at Standing Rock, animal rights &mdash; we need all our voices in the  ongoing dialogue against regression. We must choose our battles carefully, and weigh our words with care and caution. But we must not let ourselves be silenced, and remembering Zola's bravery will help. Opposition will always stand in our way, but this can be overcome through our unity as we gather together to accomplish our shared goals in pursuit and love of freedom, of justice, and of equality for all people.