Can Satyagraha Heal Our Gun Insanity? 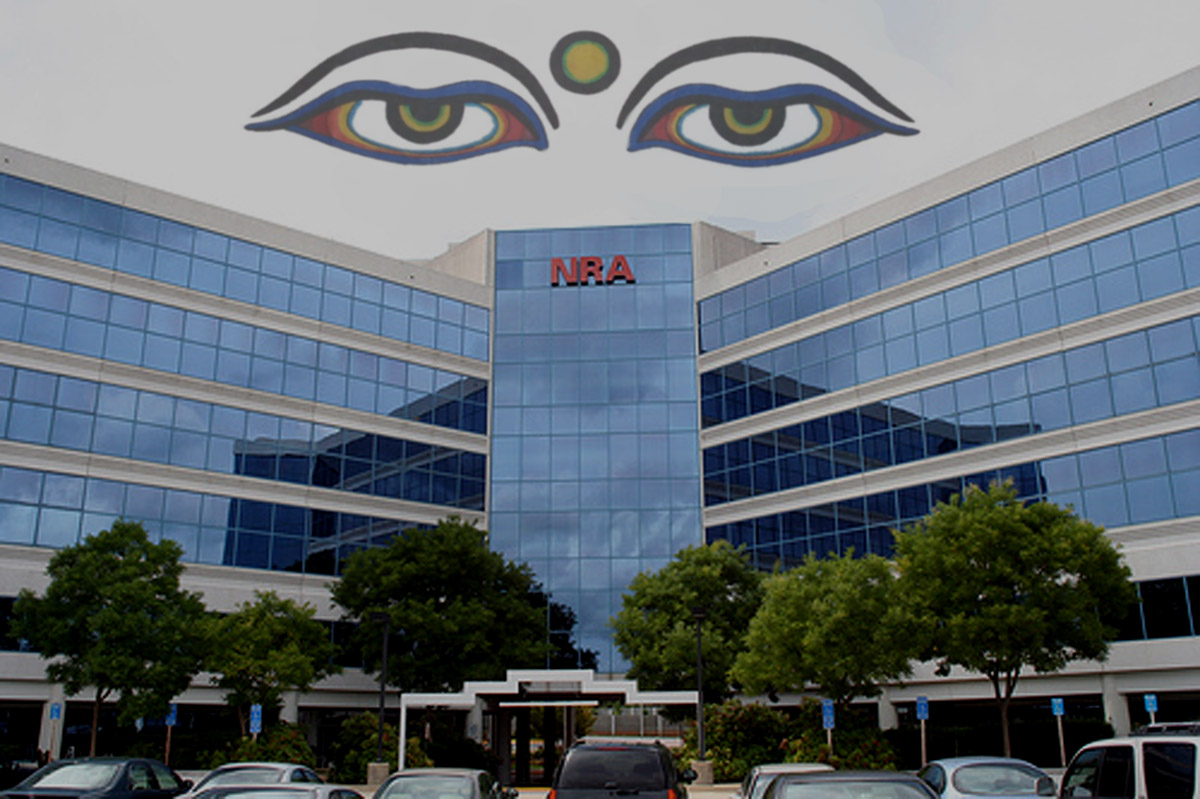 I used to work for a government tech contractor in Reston, Virginia. It was a fairly dull job, so I amused myself by exploring the surrounding neighborhoods of wealthy suburbs that ringed Washington D.C. During one of my explorations I suddenly found myself looking up at a building whose sinister presence made my skin creep. I was staring up at the headquarters of the National Rifle Association in Fairfax, Virginia.

This was after the Sandy Hook tragedy in December 2012, so I did feel a fresh hatred for the NRA as I gazed up at their shiny glass moloch. I hated the NRA because its successful lobbying and funding of politicians had a lock on Congress and was thus directly responsible for thousands of gun deaths in the United States. Of course I understood that the NRA was not the only corrupting influence on our legislature, which also skews towards NRA-approved politicians due to gerrymandering and the severe population imbalance represented by the US Senate — but I was accustomed to thinking of the NRA as the mastermind organization behind our country's epidemic of gun violence, and as I stood there looking at their building I felt as angry as if I were looking up at the capitol building of a murderous fascist dictatorship.

Today we react dumbly to the news of 14 shooting fatalities at a public health center in San Bernardino, California, only days after a gun-laden terrorist attack on a Planned Parenthood center in Colorado. I read the expressions of concern on Facebook, and I scroll stupidly through anguished tweets that say things like "fuck the motherfucking NRA" as if this foul language will help anything. We search in vain for sentences we can speak that are not cliches. We are all sick to death of feeling helpless as the rising sickness of random mass shootings spreads. We can take it no more.

But this is when we need to look within and ask: how hard we are willing to struggle to fix this problem? There is a path to change that has a great likelihood of success, but it requires a nearly heroic level of focus, commitment and courage. It also requires us to open our own minds to a tremendous change in attitude. To choose this path is to make a commitment to understanding, forgiving and loving our opponent in the struggle. I'm speaking, of course, of the methodology demonstrated by the Satyagraha campaigns of Mahatma Gandhi, the civil resistance protests of Martin Luther King and the Occupy movements of the past few years.

Of course all of these protest movements already influence gun control initiatives (and I'd like to follow this article up with another one in which I will survey the field of civil resistance to our country and our planet's gun problem). But the wise, empathetic touch of Gandhi or Martin Luther King appears to be completely missing from our current public dialogue about gun control. Ending gun violence should be a universal concern (and it really is a universal concern, even within pro-NRA circles, though many would not believe so). Instead of attempting to conduct a public dialogue about gun violence as a universal concern, we cheapen it by ditching the debate into the familiar ruts of liberal and conservative ideology. If after yesterday's San Bernardino shooting we are only going to ask Donald Trump for his opinion, then we can rest assured that wisdom and insight are far away.

Where can wisdom and insight be found? Satyagraha is not only about public protest and mass action (though public protest and mass action can be very productive in the service of a good cause). It's also about the way we think. It requires letting go of hate and judgement and anger. The things that went through my mind as I stood there staring up at the NRA headquarters are not helpful in the context of Satyagraha. I have trouble getting past my own anger to see both sides of this terrible issue, and I think many of my fellow citizens will have even more trouble than me.

But love and forgiveness and understanding are not optional in a true campaign of civil resistance. Martin Luther King and Rosa Parks always forgave their opponents, and this was key to their success. They strove to understand the points of view of those who harassed and blocked them, and to evaluate the motives of even their most hateful enemies in the most positive light. Gandhi and his enthusiastic crowds of marchers did the same.

Gun control advocates spend a lot of time hating, mocking and insulting the cultural mindset represented by the NRA. How do we transform this hatred into understanding? We can start by considering the fact that pro-gun Americans are regular people with families and children and safe communities. Therefore, we know that gun enthusiasts do not actually like random gun violence. Rather, they believe that their imagined enemies (either local criminals or foreign invaders) already have guns, and that gun control asks them to disarm without any believable evidence that their imagined enemies will also disarm. It's easy to see why this proposal doesn't fly.

This simple equation is absolutely crucial for those of us who wish to end gun violence to understand. Gun availability is a weak attempt at self-protection in a paranoid and violence-obsessed society. This paranoia and obsession with violence is the primary engine of our country's rising gun insanity, and this engine lives not at the NRA headquarters in Fairfax, Virginia or at the US Capitol. It lives in the hearts of American citizens, of average voters, of regular folks.

This is why our attempts to address the gun violence epidemic by criticizing corrupt politicians or NRA executives are so frustratingly ineffective. As long as conservative pro-gun politicians and NRA leaders know that they are supported by a vast segment of the American population, they will continue to boldly uphold their positions, even as the death toll from random mass shootings rises. Sure, we can continue to pressure, harass and insult the inferior minds in Congress and at the NRA. But this will never bring change. Congress and the NRA are the symptom of the problem. The problem is that our entire society has embraced rampant cultural paranoia, and is obsessed by fear of apocalyptic violence. To make it worse, these fears are reinforced by the actual violence that is reported from around the world every day. These fears are grounded in reality. Until the reality changes, the fears won't go away.

As I've previously written (in an article sadly inspired by a different recent mass shooting), there is little understanding among gun control advocates of the sincere emotions and beliefs that support easy weapon availability in the United States, because sympathetic understanding of our opponents is so alien to our habits of political dialogue. It's easy to caricature NRA supporters as insane or stupid, and much harder to realize that they are decent citizens with family values who perceive that the outside world is so brutally violent that guns make them safer.

Maybe these decent citizens will not stop believing that the outside world is brutally violent because it is. And maybe we have to strive to solve this problem at the same time that we strive to address our gun sickness. We can't cure one problem without curing the other.

As I stood there in Fairfax, Virginia two years ago staring up at the NRA's gleaming glass office building, I was thinking the wrong way. I was filled with hate and anger, which means that I was not doing anything to help myself or anybody else. I was just wallowing in my own feelings, and that's what a lot of us do these days as we talk about gun control.

If I talk to an NRA member but fail to listen to that NRA member's point of view, if I only strive to correct and inform my opponent instead of trying to understand my opponent, then I am not ready for nonviolent resistance, for civil disobedience, for Satyagraha.

I am willing to try harder, because I believe that the path of Satyagraha has a better chance to cure our epidemic of gun violence than the weak, angry and ineffective attempts at legislative correction that are currently going absolutely nowhere in Washington DC. Civil resistance and organized peaceful protest is never an easy path. But it's the only path that will work.

How hard are we willing to struggle to cure our gun violence problem?

How much courage are we willing to bring?

How much hatred are we willing to let go of?

These are the tough questions we must ask each other as we discuss the problem of gun violence today.

Honest, Levi, I think the NRA is a symptom and a diversion although they really are very powerful.

The real lifeblood of the Militarry-Industrial Complex (I guess that was Ike's term) is Boeing, Martin Marietta, Lockheed-Martin, etc., so much more money involved than the NRA.

The reason I've been skeptical of gun control is that it is all out of control. There are so many guns out there in the USA that it would take years and years for any beneficial effects of gun control to kick in. The violent extremists out there are smart, they can get guns and it's gonna be that way for a long, long time.

Pat Moynihan, a smart guy, (gosh I hope I don't sound like Trump) was more for ammunition control than gun control. That is why the terrorists in California had stocked up on bullets and other death delivery devices. We need to Get Smart about gun control. And by the way, with every one of these things I am more into Pacifism. The old answers don't work. We tried military solutions in Iraq in 2002 annd 2003. It didn't work.