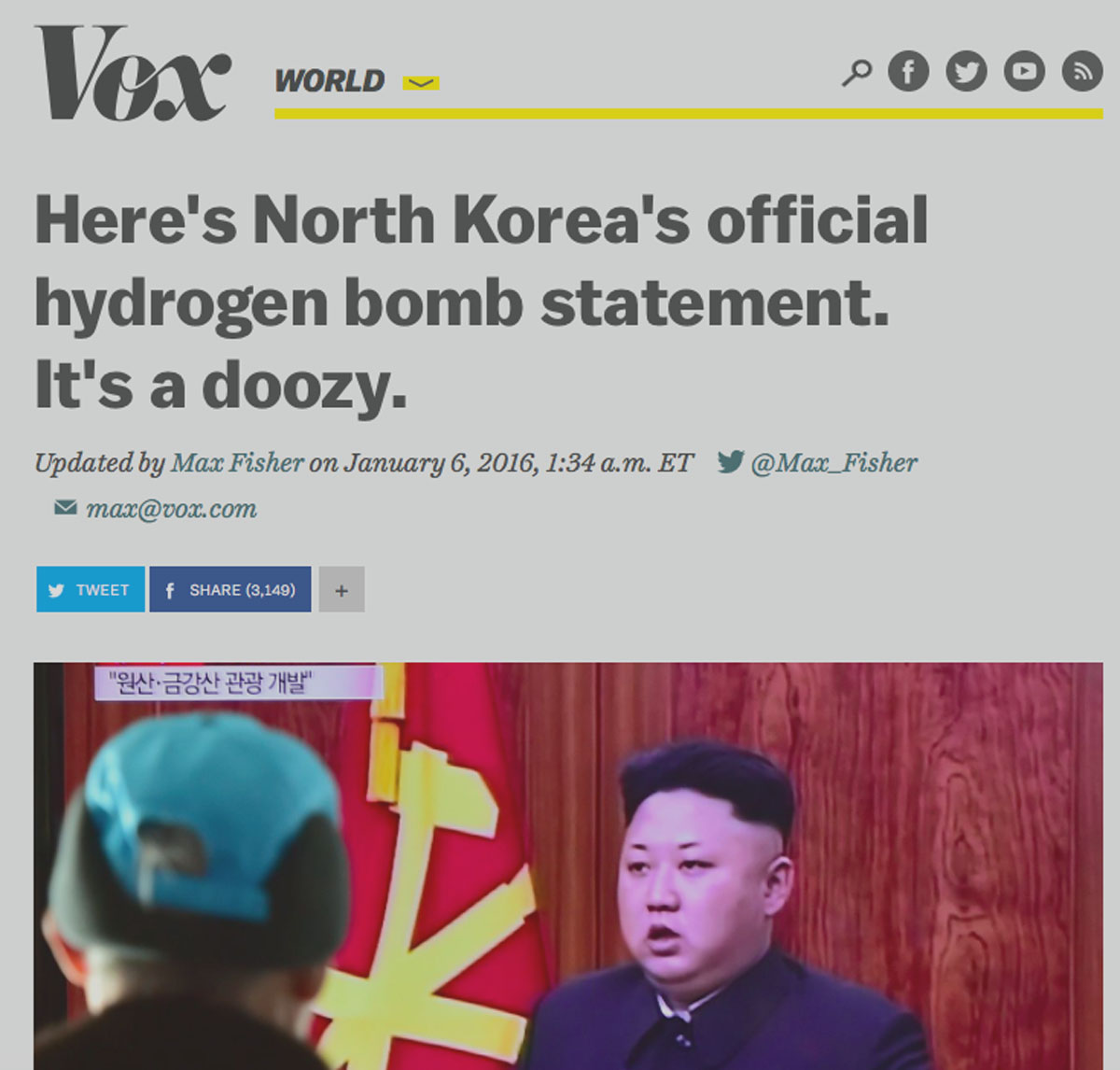 "Here's North Korea's official hydrogen bomb statement," says the headline at Vox.com. "It's a doozy." Below the headline is a photo of Kim Jong-un with a stupefied expression on his face.

This type of mockery is typical of the way our news outlets gape and marvel at North Korea — a nation that has been in a serious crisis for decades, and that presents an extremely dangerous threat to the stability of the world. Because North Korea is a closed foreign land, our only access to our avowed enemy is through history books or news reports, and these sources offer a deadening lack of options: in the USA we either trivialize North Korea, or we demonize it. Usually we do both.

The basic narrative most Americans accept is this: North Korea is the last holdout of Stalin-era communism, and the country is run by a kooky madman with a bad haircut. Also, they have atomic bombs, and might now have hydrogen bombs. If you know these three facts, you know as much as 99% of Americans know about North Korea.

Since we really ought to learn more than this about the foreign nations that we are supposed to consider our mortal enemies, we must conclude that the American people are being badly let down by news outlets like Vox Media (which was supposed to be an innovative and "new" type of journalistic outfit, though apparently not when it comes to North Korea). The banality and superficiality of Max Fisher's "It's a doozy" headline wouldn't be so offensive if the article accompanying the headline was not also banal and superficial.

"It's a doozy." I can hear my friends speaking the same words, because none of my friends actually knows anything about North Korea (including my Korean friends). Most conversations I have participated in about North Korea fixate on the personality of Kim Jong-un. "Too bad they can't get that crazy guy out of there," I can picture my friends saying. There is a general presumption that all the decisions made by North Korea's government must be subject to the whims of this "crazy guy". This is reinforced by our celebrity-obsessed news media, as in yet another typical poorly conceived Vox Media article by, once again, Max Fisher, who has really been phoning it in. 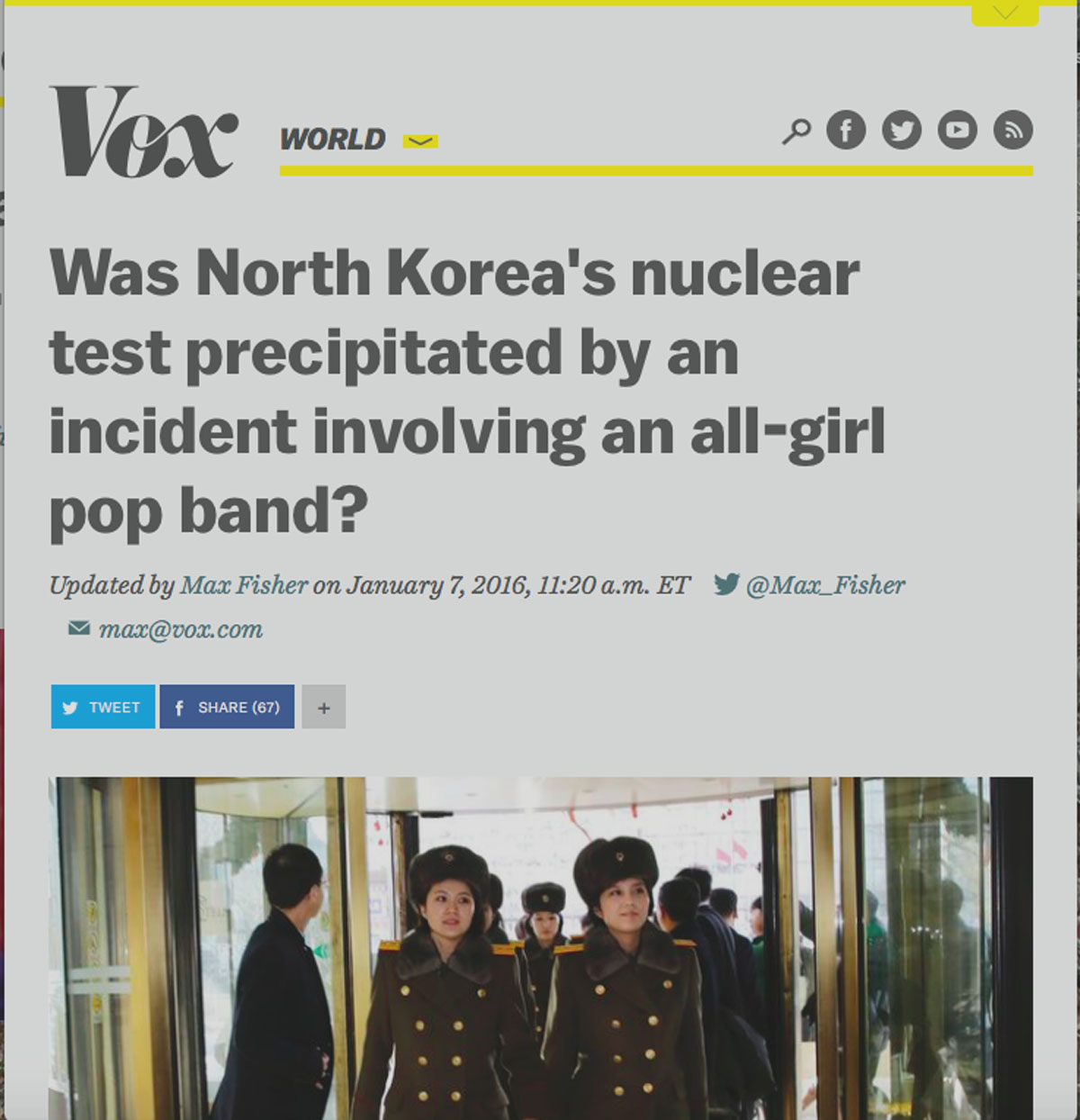 Why would Vox give so much space to an unsourced and unsubstantiated rumor that has something to do with a Korean girl-pop band? There seems to be an implication of a bad joke, perhaps a suggestion that Kim Jong-un is a freaky pervert with bad musical taste. Elsewhere, in Vox and other publications, we hear that one reason North Korea may be testing hydrogen bombs is that Kim Jong-un's recently had a birthday. The picture is complete: the fat kid wants cake.

It's better that we are led to mock and hate one single Korean dictator than all the people of North Korea, of course, and maybe our habit of personalizing the nation's governmental actions as the whims of a single person help to remind us that the North Korean people are suffering badly within this regime. Most Americans I know feel sad for the North Korean people — though we don't seem to ever try to do much for them, and probably blame them for their bad judgement. "Oops! You picked a crazy guy as your dictator. Sucks for you!"

This is why we at Pacifism21 are proposing an experiment. We would like you to be a part of it by contributing to the discussions we'll have.

Here's our challenge: how can we take a fresh look at this foreign country called North Korea? How can we hit "reset" on our prejudices and presumptions about this enemy? I am going to begin our series with a few blog posts about the history and culture of North Korea, and I hope others will post comments and contribute blog posts of their own. This is an experiment that we will carry out for several weeks or months (and I'll be furiously learning about North Korea as fast as I can as we go — I'm already wrapped up in one stack of excellent history books).

The goal is to write a set of articles that will amount to a broader and more perceptive understanding of current events in North Korea than that which can be currently obtained from outfits like Vox Media or CNN or the New York Times, which really ought to be doing a good job at putting the pieces together, but aren't.

We're going to employ a method that I have used before in an article called Donald Trump: A Pacifist Analysis. A pacifist analysis is meant to be an objective 360° review of problem or a conflict that attempts to reconcile or at least mutually recognize all variants points of view to the conflict.

Like a good psychoanalysis, a good pacifist analysis can be very revealing. When we analyzed Donald Trump in this way, we were able to determine that fear is the underlying ingredient to Trump's current popularity, and were able to characterize what type of fear this is and how it can be dealt with. This is the type of resolution we will look for as we begin our inquiry into North Korea's conflict with the world. What is the root cause of this conflict, and how can the conflict be peacefully resolved?

Of course, Donald Trump was an easy topic for a pacifist analysis compared to North Korea. Given the complexity of this region's history, the task I am about to kick off with the first blog post later this week will be the most ambitious thing I have attempted on this website so far. I'm psyched about this. I am looking for contributions, and if you feel you have an article or blog post to offer please get in touch.

At times our analysis of North Korea may feel harrowing and upsetting, as we will be writing about the horrors and violent abuses that the Korean people have suffered in the last 120 years (since the first steps in 1895 towards Japan's eventual occupation of Korea, which would last until 1945). We are going to have to explore some dark chapters of recent human history to complete this task.

The history of Korea will also hit home for many Americans, since we lost 34,000 soldiers in the Korean War between 1950 and 1953. Many Americans only know the American side of the Korean War story, but this three year war was a complete disaster, a holocaust, for the Korean people. Two and a half million civilians died, along with millions of soldiers from both North and South.

We shouldn't jump to conclusions as we begin our pacifist analysis, but it's a good bet that we'll discover that the near-hysterical paranoia and blood alienation that seem such an integral part of North Korea's national identity today can be explained by two traumas of still-living history: the brutal Japanese occupation from 1905 to 1945 and the horrific Korean War of 1950 to 1953. We'll also look at the effects of the fall of North Korea's once powerful Soviet Communist ally on the current mindset in Pyongyang.

Our main goal is to understand why North Korea is so hostile towards western nations. We shouldn't jump to conclusions, again, but we are going to keep in mind the possibility that North Korea's hostility to western nations may be a rational reaction to the fact that western nations really are committed to the destruction of North Korea's government. At least this may help to explain their desire for hydrogen bombs.

If nothing else, this inquiry may bring us closer to the truth than girl pop bands or birthday cakes for Kim Jong-un.

The first post in this series, my look at the early history leading up to the Japanese occupation of Korea, will be up in a couple of days.

for whatever reason, my father in law doesn't talk much about his Korean War days. only that it was colder than he can explain and he lost a lot of buddies. he was in a tank crew. picked a guitar for the boys at night, a real player, diverting minds for a song or two. definitely pride in the service and bravery, but not much pride in the war. I've never heard him talk about the enemy. can't remember any Hollywood movies about the war. not one. but, I'm no movie dude, really. haven't even seen the new Star Wars. if you know of one, please lemme know. looking forward to the series. pg.

Paul, the first thing that comes to mind is the movie and TV series "M*A*S*H", though really the treatment of war in that series was so generic that they could have been just as well have been in the World War 2 Pacific theater, or in Vietnam. I agree that there is very little well-known literature or art about the Korean War, either from the perspective of outsider nations who fought there (like the USA) or from the perspective of North or South Koreans. I would love to hear any suggestions from others on this front.