To Save Ourselves, We Must Never Stop Protesting 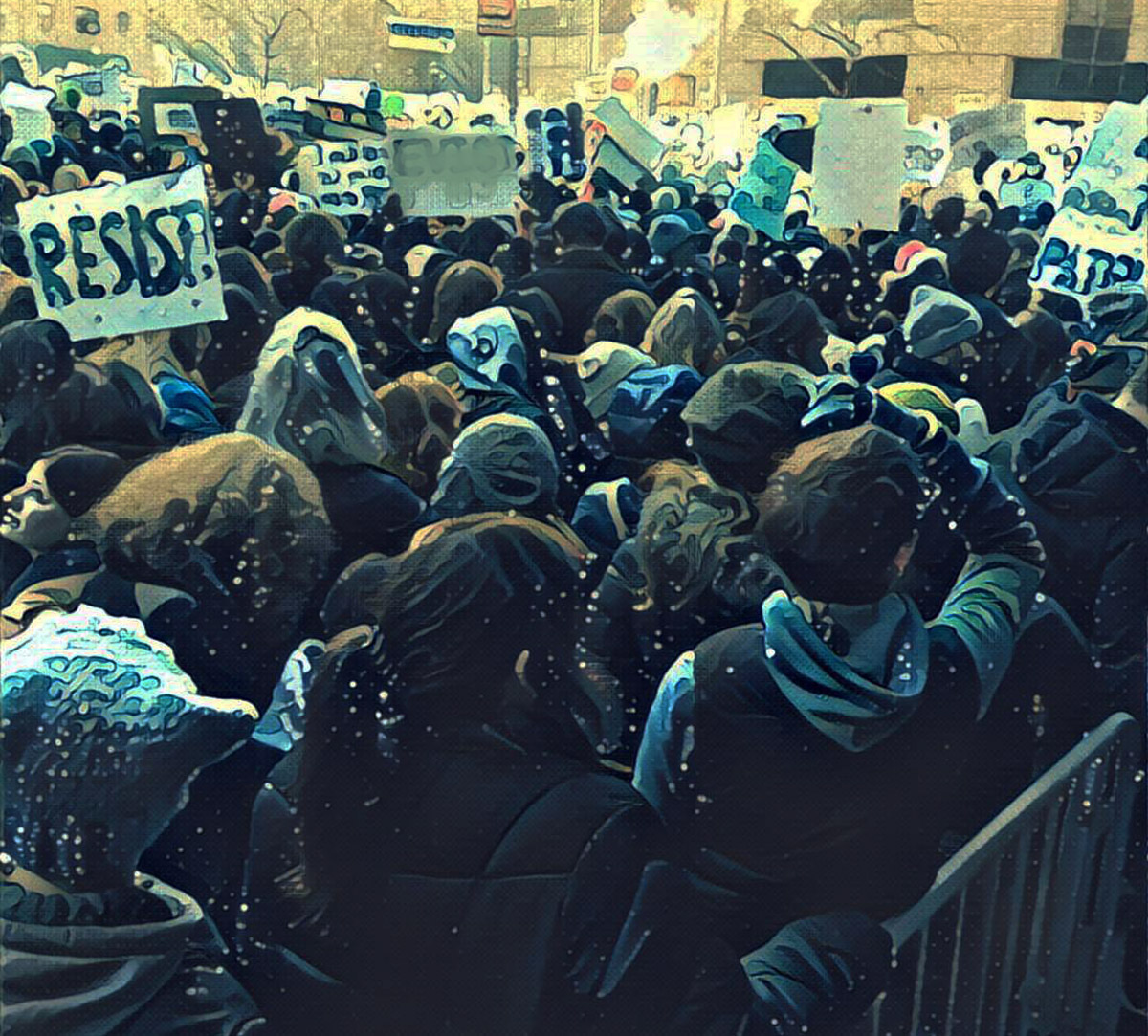 The hostile takeover of American democracy by Donald Trump and his team of fascist plotters is proceeding as expected. Yes, they are expertly deploying the Nazi playbook — demonize, shock, overpower and lie — and yes, many Americans are succumbing to the hypnotic stupor of deadly propaganda. Every single thing we love and cherish is at stake: our freedom, our vote, our dignity, our morals.

The latest outrage is a direct attack on Muslims and the first moves towards Iraq War Three (every fascist coup involves a foreign war, which creates the conditions for domestic hysteria that serve a tyrant well). This is what we must resist and prevent. We cannot fail, and yet it is often hard to know which path to follow when the stakes are so high. It's all too easy to become discouraged and confused. There's a meme going around right now that "public protest is a waste of time". I saw a major newspaper article a few weeks ago that pointed out how ineffective public protests have been in other countries like Poland that are succumbing to fascist dictatorship. This article declared that street action is harmful to the cause of freedom, because it offers a comfortable illusion of progress even as oppressors quietly gain ground. Another similar article is making the rounds today, asking if Trump's latest outrages against Muslims and refugees are a "head fake" designed to cause loud public outrage that will distract Americans from the even worse outrages going on behind the scenes, such the appointment of the white supremacist Steve Bannon to the National Security Council. Every point of view must be considered and heard, but these misguided articles do not reflect the vital way that street-level protests fortify and amplify political action. Americans, do not stop protesting! The idea that political action is an either/or between street-level and institutional is bizarre and unfounded. Street protest and institutional action go hand in hand. A loud crowd on the street does not make it harder for a Washington DC politician to push the same objectives the protestors on the street are pushing. Indeed, it's quite obvious that the loud crowd on the street outside a government building helps those inside the building who are arguing the same points. Here are a few other ways public display of outrage is vital to a good cause:

If you have heard the idea going around that protesting on the streets is harmful to the cause of fighting Trump, I urge you to avoid this kind of either/or mentality. We must destroy Trump and Pence and Paul Ryan and Mitch McConnell and Steve Bannon before they destroy us, but we will need every kind of activism and every kind of activity for this cause. Do not leave the streets! Do not stop making signs! Do not take off your hat! As a person who has been protesting for many decades, I have a hard time imagining why any journalist or pundit would spread the idea that loud public protest is ever detrimental to a good cause. One reason may involve personal style: some people just feel very uncomfortable in crowds, and may feel embarrassed at the simple, overt expressiveness of a large crowd. One particularly insulting remark I recently heard is that protests are harmful to the anti-Trump cause because they mollify older political activists with warm nostalgia for the age of Woodstock, the Vietnam War protests, and Martin Luther King. In fact, the Vietnam War was as ugly and atrocious a war as any ever fought on this planet, and the civil rights marches led by Martin Luther King were often hard, painful and bloody affairs. There's nothing warm and nostalgic about either of these struggles, and it's really simplistic to describe the battles of that generation in such minimizing terms. Protestors in the 1960s and 1970s did manage to effect change. Today, we are facing an incredibly determined and devious fascist takeover of our government, and we must recover the fighting spirit that will allow us to prevail. Sure, we want political insiders to do everything they can. But for the rest of us, it's the streets or oblivion. We choose the streets. We must continue to protest in every loud and disruptive way we can, and we will.